Bruce Shiels opened the meeting with a prayer. Marty Phillips followed with the Pledge of Allegiance.

2017 Meeting Minutes: Upon a properly seconded motion, the minutes from the 2017 meeting were approved as submitted.

Treasurer Report: Jim Echoff’s 2018 (to date) financial report was presented by Steve Little. Jim was unable to attend. Upon a properly seconded motion, the report was approved based on available information. We have a total of $26,298.60 on deposit. The normal audit was not conducted due to a lack of backup records being available at the meeting. An audit will be done in 2019. Overall, we are holding our own from a financial standpoint.

Membership Committee: Jim Echoff’s efforts to track our membership show we currently have 209 members on our roster. Of those 209, 121 are paid up to date (life members or paid up annual dues) and the remaining 88 members are over a year in arrears on dues.

Old Business: Steve reported that the idea floated by NCIS to create an association of federal law enforcement associations has come to fruition. The white paper on this endeavor will be posted on the association web page. It provides members with discounts on entertainment, hotels, legal services etc.

ELECTIONS: Steve Little reported that the election process was problematic for a variety of reasons, primarily that no one self nominated or was nominated by another member after gaining permission from the nominee. (Note: At the 2017 reunion, Marty Phillips accepted a request to run for VP.) Considerable discussion followed centering on the need to have a rotation of leaders in the association to bring in new, fresh ideas and approaches in order to keep the organization viable. The discussion covered frequency of reunions, should the CGIA continue to exist, and the best way to communicate with our members and potential members, including the use of social media. The result of this discussion included Gerald Brooks volunteering to become our public information officer in order to create a CGIA presence in the social media world. Additionally, SA Matt Harris, a current CGIS Agent assigned as the RAC, CGIS CGTRADETS will institute a CGIA indoctrination program at FLETC Brunswick, GA for all newly assigned CGIS agents graduating thru that course of instruction. Dick Davidson and Bill Whetstone offered to go to FLETC to speak to these graduating members about CGIS. The slate of officers for the upcoming term were approved as Marty Phillips as President, Matt Harris as VP, Jim Echoff as Treasurer, and Jeff Kirkpatrick as Secretary. The motion included the provisos that (a) Marty Phillips WOULD NOT accept a second term and (b) that the membership would support and assist him in fulfilling his duties.

2019 REUNION: Matt Harris, Bud Hall, and Sue Wood will look into hosting a reunion in the Brunswick, GA area in October, 2019 and hopefully including a tour of FLETCHER as part of the program.

SYMPATHY CARDS: Thanks to the efforts of Jim Echoff, we now have Association sympathy cards to send to the survivors of families of individuals associated with CGIA who have passed the bar. Everyone is requested to notify the association leadership as soon as possible upon learning of the passing of one of our family.

PRESIDENT EMERITUS: Upon a properly seconded motion by Toby Chapeau, the membership voted to honor our founding father, Bruce Sheils, by naming him to this honorable position. Bruce’s early and continuing efforts have given us all the opportunity to enjoy the friendships we all share.

The meeting was adjourned at 1430.

Upon a properly seconded motion, the minutes from the 2017 meeting were approved.

A review of the agenda for the 2018 Annual Business Meeting and Reunion was completed.

Jim Echoff, who was unable to attend the meeting had previously requested an audit letter be signed. While a financial report was provided, the board agreed NOT to take any further action (I.e have the audit letter signed) inasmuch as there was no ability to look at backup for the report. The audit will need to be conducted at the 2019 reunion.

The next annual Board meeting will be held during the 2019 conference.
The meeting was adjourned at 0920. 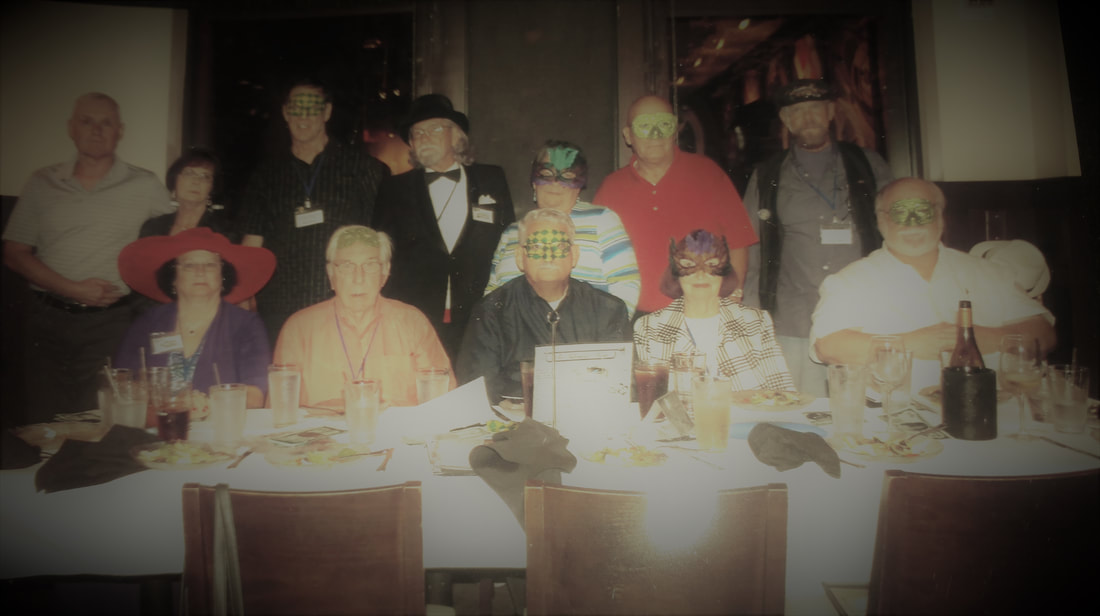